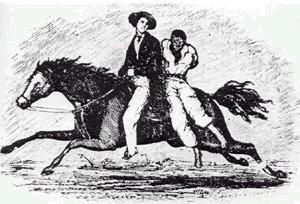 John Murrell stealing a slave
My article on the literary appearances of outlaw John Murrell and the Vicksburg gambler lynchings is soon to appear in Mississippi Quarterly. A preview of the first two paragraphs:

'Independence Day, 1835: The John A. Murrell Conspiracy and the Lynching of the Vicksburg Gamblers in Literature.'

'1835 has long been renowned as an extraordinary year for the Mississippi, not least because November witnessed the birth of one Samuel Langhorne Clemens. Events in the summer had already ensured that Independence Day, 1835 would enjoy a long afterlife in memory. Violence spread along the river. In Madison County, Mississippi, particularly the towns of Beattie’s Bluff and Livingston, paranoid terror gripped the population. It was widely believed that a criminal conspiracy masterminded by the (already incarcerated) John A. Murrell was about to result in a slave rebellion, timed to coincide with the upcoming national holiday. From the end of June to the middle of July, mob violence and vigilante justice held sway, resulting in ‘several dozen’ deaths and lynchings. Itinerant whites – primarily, steam doctors – were hanged alongside suspected slaves. As the Columbus (Miss.) Democratic Press described Murrell’s plot, ‘A more diabolical attempt – a deeper laid scheme of villainy, was never brought to light […] white men […] have, with a fiend like madness, instigated the ignorant and generally contented African, to rise.’

In Vicksburg, tensions between the town and its itinerant community of gamblers were about to ignite. It began with a brawl, at the Fourth of July celebration hosted by the Vicksburg militia between some of its members and a gambler (or a known associate of gamblers), Francis Cabler. After tarring and feathering Cabler, the militia resolved upon the formation of an Anti-Gambling Committee. Gamblers were given twenty-four hours to leave town. After the allotted period of time had passed, the militia and a civilian mob descended upon the ‘Kangaroos’, the infamous waterfront district that took its name from a famous gambling-house that had burned down the year before. Breaking up roulette wheels and faro tables as they went, the militia found a group of individuals ensconced in Alfred North’s coffee house. After an exchange of shots the militia stormed the building. One of its members, Dr Hugh Bodley, was shot dead. Five men – labelled as gamblers – were seized and promptly hanged. Other river towns followed suit, exiling, though not executing, their own gambling communities. The Louisville Advertiser announced that the ‘proceedings at Vicksburg have kindled a spirit throughout the lower country which is breaking forth at every point, and obliging the blackleg fraternity to make their escape with all haste...’