River of Dreams - A First Glimpse 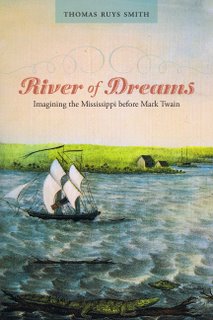 A first glimpse of the cover of River of Dreams: Imagining the Mississippi Before Mark Twain (Louisiana State University Press, Spring 2007). This is a first draft and subject to change before publication, but it gives a hint of what's to come. The background is a detail from Herzog Friedrich Paul Wilhelm von Württemberg's lithograph, Die Balize an der Mündung des Missisippi (1828-1835).

And to go along with the cover, here's the promotional copy for the book, soon to appear in the LSU Press Spring 2007 catalogue:

Even in the decades before Mark Twain enthralled the world with his evocative representations of the Mississippi, the river played an essential role in American culture and consciousness. Throughout the antebellum era, the Mississippi acted as a powerful symbol of America’s conception of itself - and the world’s conception of America. As Twain understood, “The Mississippi is well worth reading about.” Thomas Ruys Smith’s River of Dreams is an examination of the Mississippi’s role in the imagination of the times, and explores its cultural position in antebellum literature, art, thought, and national life.

Presidents, politicians, authors, poets, painters, and international celebrities of every variety experienced the Mississippi in its Golden Age. They left an extraordinary collection of representations of the river in their wake, images which developed as America itself changed. From Thomas Jefferson’s vision for the Mississippi to Andrew Jackson and the rowdy river culture of the early nineteenth century, Smith charts the Mississippi’s shifting importance in the making of the nation. In contrast, he examines the accounts of European travelers, including Frances Trollope, Charles Dickens, and William Makepeace Thackeray, whose notorious views of the river were heavily influenced by the world of the steamboat and plantation slavery.

As the antebellum period progresses, Smith discusses the importance of visual representations of the Mississippi, exploring the ways in which views of the river, particularly giant moving panoramas that toured the world, echoed notions of manifest destiny and the westward movement. He evokes the river in the late antebellum years as a place of crime and mystery, especially in popular writing, and most notably in Herman Melville’s The Confidence-Man. An epilogue discusses the Mississippi during the Civil War, when possession of the river became vital, symbolically as well as militarily. The epilogue also provides an introduction to Mark Twain, a product of the antebellum river world who was to resurrect its imaginative potential for a post-war nation and produce an iconic Mississippi that still flows through a wide and fertile floodplain in American literature.

From empire building in the Louisiana Purchase to the trauma of the Civil War, the Mississippi’s dominant symbolic meanings tracked the essential forces operating within the nation. As Smith shows in this groundbreaking work, the story of the imagined Mississippi River is the story of antebellum America itself.

Thomas Ruys Smith is a lecturer in American literature and culture at the University of East Anglia in the United Kingdom.

Email ThisBlogThis!Share to TwitterShare to FacebookShare to Pinterest
Labels: River of Dreams