My review of Thomas Buchanan's excellent Black Life on the Mississippi (University of North Carolina Press, 2004) has been published in the Journal of American Studies, 42:2 (August 2008), 358. It's available online here, and as a PDF here. Alternatively, you can simply read it below: 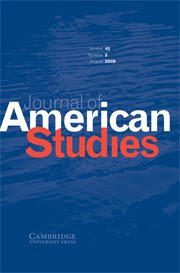 In Uncle Tom's Cabin (1851) Harriet Beecher Stowe produced one of the defining antebellum descriptions of the Mississippi: “Those turbid waters, hurrying, foaming, tearing along … Would that they did not also bear along a more fearful freight, the tears of the oppressed, the sighs of the helpless.” In this essential social history of black life on the Mississippi, Thomas Buchanan proves that although oppressed, the slave and free black men and women who lived and worked on the river were far from helpless. Alongside the familiar story of bondage and liberation, Buchanan invites his readers to enter the hitherto hidden “Mississippi world that slaves, and their free black allies, created amid the attempts of masters to control their labor and family lives.” As well as fitting a particularly large piece into the puzzle of antebellum river life, Buchanan's treatment of these unexamined aspects of African American experience should significantly influence conceptions of slavery and free black life far more widely. This was a world, as Buchanan describes it, of “secrets and dreams”: concealed communication networks, acts of resistance and resilience, sporadic rascality, music, escape, struggle for postbellum legal rights, and, above all, grinding work.

Buchanan's research is impeccable. Before now, readily available material concerning black life on the Mississippi was negligible. He has made good use of antebellum travel narratives, and even better use of court records and slave testimonies – particularly that of steamboat waiter and escapee William Wells Brown, whose story is woven into each chapter. Perhaps surprising, alongside the miseries of slavery and the dangers of steamboat life, is the powerful appeal that the river held for many of its black workers – strikingly similar to that which Mark Twain described working on him and his childhood friends. As ex-slave John Parker remembered, the Mississippi attracted him “like a magnet”: “as soon as I was free to move in my own selected direction I made straight for the river.” Two reservations: Buchanan is too swift to dismiss Twain (yet makes no mention of Pudd'nhead Wilson (1894) or the character of Roxana and her experiences as steamboat chambermaid). Similarly, he seems to ignore the fact that P. B. S. Pinchback, the first black governor in America's history, was also an apprentice and partner to that most famous riverboat gambler, George Devol. But this is unreservedly an important book – vital for students of the Mississippi and relevant far more widely.