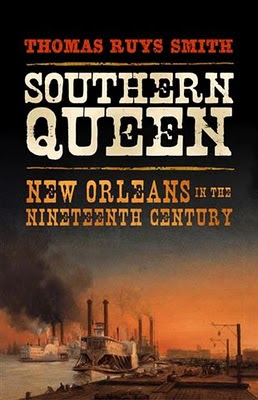 Above, a first glimpse of the cover of my new book, Southern Queen: New Orleans in the Nineteenth Century, to be published Summer 2011 by Continuum. Here's the blurb:


In the nineteenth century, there were few cities in the world more remarkable than New Orleans. Cosmopolitan, alluring, dangerous – a profound mélange of Old World sensibilities and New World possibilities – it was a place unlike anywhere else in America. Southern Queen: New Orleans in the Nineteenth Century examines the city’s rise and fall in this crucible period, charting its transformation from a small colonial backwater on the banks of the Mississippi, through the apex of its power and influence in the antebellum years, to the years of poverty and hardship that followed the Civil War. It is a story characterised by the city’s reputation for decadence, exoticism and illicit pleasures – the glittering carnival mask that the Big Easy still presents to the world. But it is also a story punctuated by a host of disasters that provide stark counterpoints to the glamour of Mardi Gras. Throughout the nineteenth century, the city that care was supposed to forget was visited by wars, epidemics, riots, and – from slavery to Reconstruction and beyond – continual and violent racial tension. Yet through it all, the Southern Queen developed a profound romantic appeal that proved irresistible to an astonishing cast of visitors - travelers, writers, artists and musicians of every kind. It was, in short, an extraordinary time in the history of an extraordinary place. This is the untold story of the life and times of nineteenth century New Orleans, and it is an account that illuminates our understanding not just of the past, but of the present and future of one of America’s most iconic places.

I'll update with a firm release date when it's available. In the meantime, more information is available on the Continuum website, and you can preorder from Amazon here (or here, if you're in the UK).

really looking forward to reading this!