Apocalypse on the Mississippi! 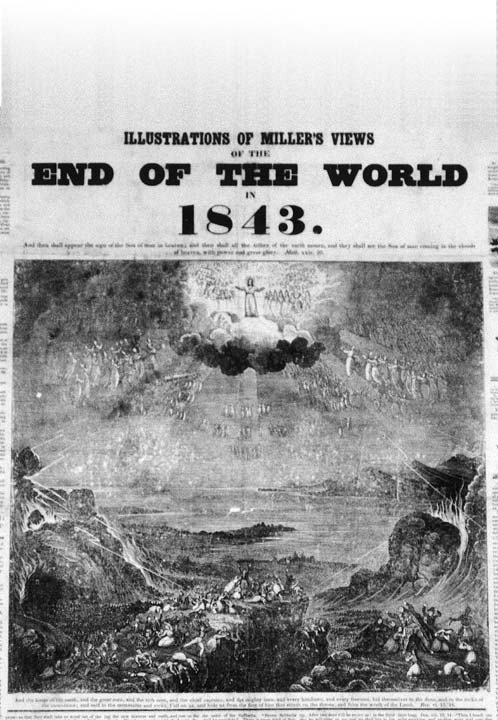 Having not long completed a book chapter on the significance of the Mississippi River for new religious movements in America in the years before the Civil War, I got a profound shock of recognition when I read this ABC report about Harold Camping’s predictions of the forthcoming apocalypse. One of the signs that the end is nigh?


The Mississippi River: Recent flooding has prompted some speculation that pervasive crop destruction is sure to follow, resulting in the widespread famine that's scheduled to help usher in the Apocalypse.

In their own way, these kind of pronouncements fit into a significant American tradition. There is a long history of prophesying Armageddon, particularly along or in relation to the Mississippi. Indeed, the current interest in the possibility of imminent rapture is as nothing compared to events in the nineteenth century, as the example of William Miller attests.

A belief that the end of the world was just around the corner was present to a lesser or greater degree in most of the new religious movements of the early nineteenth century. But the idea that the end of the world was on its way sooner rather than later was given a particular urgency by the work of William Miller. Though a Deist in his youth, Miller became a Baptist after the War of 1812. Then, through an intensive program of scriptural examination, he became convinced, in David Reynolds’ words, that “the Second Coming of Christ ... would occur sometime between March 1843 and April 1844.”[1] And as David L. Rowe points out, one of the major events that encouraged him in his work was “the dramatic New Madrid earthquakes that struck the Mississippi River Valley from 1808 to 1812” and “aroused popular apocalyptic fears.”[2]

Though Miller began to preach his message in 1831, it was not until the late 1830s that he gained a popular following. Judging the scale of his support is difficult, since Millerism was never a formal denomination, but Whitney Cross estimates that “well over fifty thousand people in the United States became convinced that time would run out in 1844, while a million or more of their fellows were skeptically expectant.”[3] Though Miller was never keen to set a precise date for the coming apocalypse, encouraged by his followers he finally settled on October 22nd 1844. Outlandish tales of Millerite preparations for the end circulated widely, swiftly followed by reports of their so-called “Great Disappointment.”

The impact of Miller’s prophecies, particularly along the Western rivers, can be seen in the effect that they had on a very significant group of Midwestern writers. In A Boy’s Town (1890), his memoir of his early years in Ohio, William Dean Howells remembered his childhood as a time when many believed that the “world was going to be burned up”: “the believers had their ascension robes ready, and some gave away their earthly goods so as not to be cumbered with anything in their heavenward flight.”[4] As Susan Goodman and Carl Dawson have described, Howells’ grandfather was at their vanguard: “Neighbors joked that whenever Joseph saw an ominous cloud in the sky, he donned his ascension robes in readiness for eternity.”[5] Even though his father assured him that this was a “crazy notion,” Howells still felt himself affected by “the tint of the prevailing gloom.”[6]

Pioneering local-colourist Edward Eggleston framed his entire 1872 novel The End of the World around the Millerite excitement of the 1840s as it played out along the Ohio River. In Eggleston’s view, “The people liked the prospect of the end of the world because it would be a spectacle, something to relieve the fearful monotony of their lives [...] Here was an excitement, something worth living for.”[7]

And in Hannibal, Mississippi, Mark Twain, nine years old in 1844, never forgot the way that a contingent of Millerites gathered on local landmark Lover’s Leap to wait for the millennium. References to Millerites can be found throughout his work, and they were still on his mind when he returned to Hannibal in 1902, for the last time. Twain climbed Holliday Hill with childhood friend John Briggs, gazed out across the river, and gestured towards Lover’s Leap: “There is where the Millerites put on their robes one night to go up to heaven,” Twain remembered. “None of them went that night, John, but no doubt many of them have gone since.”[8]

Email ThisBlogThis!Share to TwitterShare to FacebookShare to Pinterest
Labels: Meanders