Out Now: Southern Queen: New Orleans in the Nineteenth Century 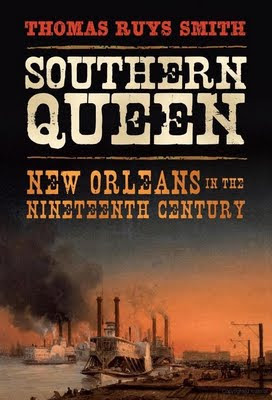 Southern Queen: New Orleans in the Nineteenth Century, is out today, published by Continuum.

At least, it's out in the UK. Its US release date is August 4th (though you can pre-order on Amazon.com). You can order it direct from the Continuum website, or from Amazon.co.uk. You can also preview Southern Queen on Google Books. If you do pick up a copy, let me know what you think either here or on Twitter. Here's what some kind folks have had to say about it so far:

"A major contribution to the history of the Queen City."

Anthony Stanonis, author of Creating the Big Easy: New Orleans and the Emergence of Modern Tourism, 1918-1945 (University of Georgia Press, 2006):


"A sweeping history of nineteenth century New Orleans, as provided now by Thomas Ruys Smith's Southern Queen, has been sorely lacking [...] Scholars and general readers will find Smith's book a valuable and highly accessible addition to studies of this alluring city. Those new to the city's past, moreover, would do well to take Smith as a guide."


"Richly appointed with voices of the city's denizens and of those who visited, Southern Queen reveals the myriad ways that the nineteenth century shaped the New Orleans we know today. In this highly readable book, Smith offers a welcome synthesis of the scholarship on this important epoch in the history of the Crescent City."

Just ordered through Amazon.ca (3 left in stock as of right now)! Can't wait to get it started.