Southern Quarterly: Roustabouts, Steamboats, and the Old Way to Dixie: The Mississippi River and the Southern Imaginary in the Early Twentieth Century 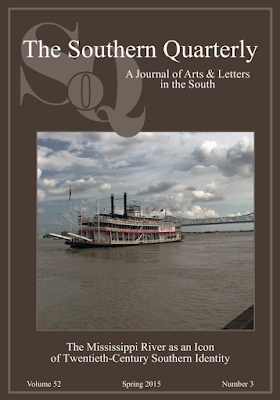 I was thrilled to be invited to contribute something to the latest edition of the The Southern Quarterly, a special issue on the Mississippi that also features river luminaries like Christopher Morris, Michael Allen and Barbara Eckstein. All told, it's a brilliant slab of river writing that does a lot to cement the development of a field of study around the Mississippi - something that's been bubbling for the last few years. My article's titled "Roustabouts, Steamboats, and the Old Way to Dixie: The Mississippi River and the Southern Imaginary in the Early Twentieth Century." I take a look at a neglected body of river writings that blossomed between the publication of Mark Twain's Pudd'nhead Wilson (1894), his last major statement on the river, and Edna Ferber's Show Boat (1926), which redefined the river for decades to come. I focus on late-career works by Southern writers like George Washington Cable, Ruth McEnery Stuart and Mary Noailles Murfree, explore a variety of travel accounts, and end up in Tin Pan Alley. For those who have access, you can browse the entire issue here through Project Muse. Alternatively, I've uploaded my article here - enjoy.

Email ThisBlogThis!Share to TwitterShare to FacebookShare to Pinterest
Labels: article