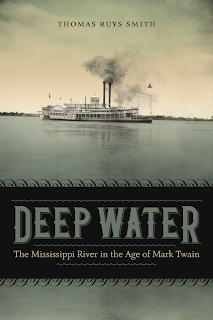 "Mark Twain knew a thing or two about the Mississippi River. So does Thomas Ruys Smith. In Deep Water, Smith intertwines the life and literature of Twain with the experiences and perspectives of many other people who lived, worked, and played along the Mississippi. Thanks to Smith, we now have a book that fully accounts for Twain’s complicated relationship with the Mississippi, a river that captured, and continues to capture, the American imagination."

—Michael Pasquier, editor of Gods of the Mississippi

"This is the story of a great American writer and a great American river, and the relationship between the two. Thomas Ruys Smith's elegantly written, deeply researched account brings us closer to Mark Twain by enriching our understanding of the river that flowed through his life and work. We see the Mississippi worlds that made Twain, and come away with immeasurably deeper insight into the worlds he made."

—Ben Tarnoff, author of The Bohemians: Mark Twain and the San Francisco Writers

"By embedding Twain's canonical work on the Mississippi River in the context of what numerous less celebrated others wrote on the same subject, Thomas Ruys Smith provides a valuable new perspective on Twain's vision, not just of the river, but of race, gender, imperialism, and national culture."

—Andrew Levy, author of Huck Finn's America: Mark Twain and the Era That Shaped His Masterpiece

Out December 17! Available for pre-order!