"All distinction of colour was lost"

Today marks the 200th anniversary of the second and final fight between English boxing champion Tom Cribb and American ex-slave Tom Molineaux. Taken together, both fights make up one of the most significant Transatlantic moments in early nineteenth century culture, encapsulating so many of the animating tensions of the age. As Kasia Boddy put it, the encounters between Cribb and Molineaux were amongst "the most mythologized events of the Regency."

Their first fight in December 1810 (narrated in Pierce Egan's classic Boxiana here) had been an epic affair, lasting 39 rounds. It had also been dogged with controversy. In the 19th round, the crowd of spectators had rushed into the ring, injuring Molineaux's hand, forever miring Cribb's victory in uncertainty. A rematch was inevitable. As Egan put it in Boxiana, "from the excellent specimen which Molineaux portrayed in his contest with the CHAMPION [...] the Moor was entitled to another trial." The fight was scheduled for September 28, 1811.

Coming so close to the War of 1812, at a time when Transatlantic relations were strained, the contests between Cribb and Molineaux were freighted with national - and racial - significance. In Egan's telling words: 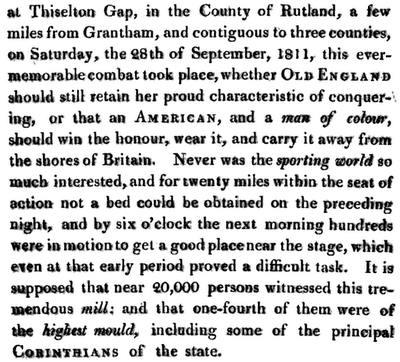 In the final event, this second fight was hardly the equal of the first. Cribb beat Molineaux handily in eleven rounds. But the general fascination with the result was no less profound. Egan records that in London, "an immense crowd" assembled in Leicester Square, outside the house of Molineaux's trainer and mentor Bill Richmond - himself an ex-slave. Cribb "was cheered through all the towns he passed" on the way back to London. Such scenes exceeded "every thing in the annals of pugilism."

Molineaux's rise to fame from a plantation in Virginia had been truly remarkable. His fall was just as precipitous; he drank himself to death by 1815. But his fights with Tom Cribb ensured him a kind of immortality. The English crowd might not have been kind to Molineaux in 1810, but it was with no irony that Molineaux's name was included in a poetic tribute to British boxing and its patriotic significance. He was pictured as one of a number of famous boxers squaring off with Napoleon: 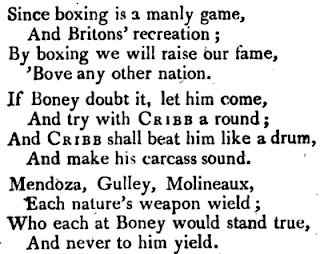 No less remarkable was the tribute to Molineaux that ran in Blackwood's Magazine in 1820. In their account of Cribb and Molineaux's exertions, the brutality of bare-knuckle fighting gave way to a rather extraordinary exhortation of equality:

And Blackwood's was equally happy to indulge in speculation about what might have been: 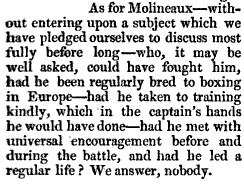 In America, however, it was a different story. Though "America's first great champion", Molineaux remained virtually unknown in the land of his birth. As Elliott Gorn describes, "Descriptions of his fights [...] appeared sporadically in the American press. But these second-hand accounts generated a feeble response in America [...] While tens of thousands of Englishmen could recite Molineaux's exploits relatively few Americans even knew his name." Molineaux deserved a better fate then; he deserves a better fate now.

Further reading: Anyone interested in knowing more about the Cribb-Molineaux fights and their rich Regency milieu could do much worse than starting with George MacDonald Fraser's historical novel Black Ajax (1999).

Email ThisBlogThis!Share to TwitterShare to FacebookShare to Pinterest
Labels: Meanders