Studies in American Culture: “Bring Our Country Back”: Country Music, Conservatives, and the Counter-Culture in 1968. 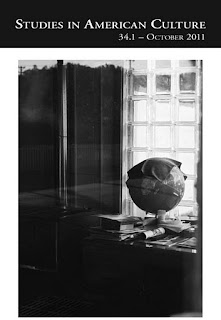 My article, '“Bring Our Country Back”: Country Music, Conservatives, and the Counter-Culture in 1968', has been published in Studies in American Culture (34.1, October 2011).

Here are the first few sentences:


By any reckoning, 1968 was an extraordinary year in the life of country music. Embroiled in the bitterness of the presidential election, appropriated by the radical young, feted with unprecedented crossover success on the popular charts, country music was omnipresent in a year of significant national turmoil. The ramifications of each of these different strands have profound implications for the development of country music, its place in American life, and, indeed, for American culture more generally [...] This article attempts to reconstruct the ways in which country music served as a vital—though ambiguous and contradictory—part of the national conversation in the late 1960s. Acting as a battleground between competing political voices, country music also provided a surprising space of rapprochement, creating curious bedfellows in a way unlike any other element of popular culture at this time.

In part, the article examines the use that George Wallace made of country music during his presidential campaign in 1968. As chance would have it, reading Rick Bragg's All Over but the Shoutin' (1997) the other day, I came across his description of the music at a Wallace rally. It bears quoting in full, and serves as a perfect introduction both to the kind of things at stake in this article, and the tangled world of country music in 1968:


Everybody seems to be here, everybody white. The city auditorium is packed with sweating, jostling bodies, and two little blond-haired boys try hard not to get stepped on as their momma, holding tight to their hands, steers them through the cheering crowd. A band is playing "Dixie" as the people clap their hands in time, and someone is waving a Confederate battle flag back and forth, back and forth. There are pipe shop workers still in their soot-covered, dark-blue work clothes, and big-haired ladies who work behind the counters of the Calhoun County Courthouse, and old-sun-scorched men in Liberty overalls and brown fedoras who drove all the way from Rabbit Town and Talladega and Knighten's Crossroad, just to see the free show. Up on the big stage a beautiful woman in a lime green minidress, knee-high go-go boots and a Styrofoam boater hat with WALLACE on it prances out and starts to sing loud about the day "my momma socked it to the Harper Valley PTA," and though it did not register at the time, I am certain a few of the church ladies swallowed their snuff.

You can read the full article here. And if you're looking for something appropriate to listen to while you read, as Bragg's memories suggest there was no bigger country song in 1968 than Jeanne C. Riley's version of Tom T. Hall's "Harper Valley P.T.A":