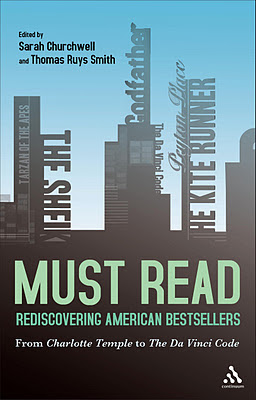 It's been a while in the planning, but I'm very pleased to say that Must Read: Rediscovering American Bestsellers from Charlotte Temple to The Da Vinci Code, co-edited with my colleague Professor Sarah Churchwell, will be published later this year by Continuum. Above, a sneak peak of the cover. Below, a little bit about the collection.

What is it about certain books that makes them massive bestsellers? Why do some of these books remain popular for centuries, and others fade gently into obscurity? And why is it that when scholars do turn their attention to bestsellers, they seem only to be interested in the same handful of blockbusters, when so many books that were once immensely popular remain under-examined?

Addressing those and other equally pressing questions about popular literature, Must Read: Rediscovering American Bestsellers is the first scholarly collection to offer both a survey of the evolution of American bestsellers across the centuries, and critical readings of some of the key texts that have shaped the American imagination since the nation’s founding.

Beginning with a consideration of the difficulty in identifying and measuring the “bestseller” as a category, this collection moves across American history by using the bestseller as a guide to the vast terrain of a nation’s popular culture. Focusing on a mix of enduring and forgotten bestsellers, the essays in this collection consider 18th and 19th century works, like Charlotte Temple, Ben-Hur or Ten Nights in a Bar-Room, that were once considered epochal but are now virtually ignored; 20th century favorites such as The Sheik and Peyton Place; and 21st century blockbusters including the novels of Nicholas Sparks, The Kite Runner, and The Da Vinci Code.

Whilst each bestseller has its own story to tell, readers will find surprising points of connection and continuity: identity politics; religion; sentimentality; violence; erotics; nation-building; cosmopolitanism; consumer capitalism; landscapes; dreams and fantasies; nightmares and prohibitions, all feature recurrently. In short, these texts and their audiences contain multitudes, and scholars and general readers alike will find that editors Sarah Churchwell and Thomas Ruys Smith have brought together a compelling collection of essays that provide fascinating perspectives on a wide variety of “must reads.”

And you can already pre-order Must Read from Amazon. More information about release dates etc. as they become available.

Email ThisBlogThis!Share to TwitterShare to FacebookShare to Pinterest
Labels: Bestsellers, Must Read